I had the honor of hosting Tom Mitchell for a Strongman seminar several years ago.
Tom headed up Florida Strongman. and was the current Masters Heavyweight Strongman Champion for the USA..
The attendance for that seminar was low, but those that came gave 100%. That was the first time I met Elliott Hulse, who went on to train with Tom up in Clearwater afterwards.
Tom had a training manual he gave us, which was very informative, and it had a quote in it from him,
"Many people could be this strong, but they don't want to work this hard."
I never forgot that quote. 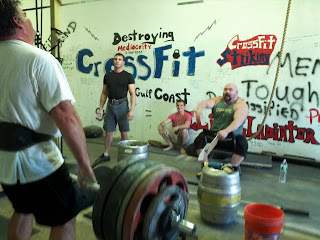 I have seen that proven time and time again over the years, unfortunately.
Many would rather not try at all, than fail trying to excel.

It seems that weakness, laziness, apathy, and inability to keep commitments are more the norm than the exception.

However, I know there are dedicated, committed, disciplined peolpe out there who want to excel, who want to improve, who  want to unashamedly be the best.
Those are the people I train. They are the only kind of peole I train.

At the Cave, excuses are tolerated. Either you train hard and consistently or you are told to leave.
I interview every person pretty hard about what I expect from them if I accept them into our training.
That narrows it down real fast.

My thanks to Tom Mitchell for the insights he shared several years ago. He's saved me a lot of time, and helped me to only work with the most dedicated people around!

"I Will Be Iron" by Bud Jeffries

Where I get my supplements